Door County, Wisconsin was named after “Death’s Door“, the legendary passage between Green Bay and Lake Michigan. The exact number of deaths and ships lost in this narrow passageway is unknown but the official 1906 Sailing Directions for the area describes the passage this way:

There is a strong current setting in and out according to the direction of the wind, and many vessels have been lost in con­sequence. It is frequently so strong that sailing vessels can not make headway against it. The coast is rock-bound and certain destruction awaits the craft going ashore.

Did we go through it? Noooo, we just peeked over as we rode by!

For the past month, we cruised all over Door County and the waters of Green Bay. Although this area is a bit off the beaten path, Wisconsin is Craig’s boyhood home so he was excited to spend some time here. This area has a quieter, laid back, country feel, tons of homemade ice cream, fried cheese curds, old fashioned Supper Clubs and good, down to earth folks who have never lived outside Wisconsin (a foreign concept for me, haha). It’s not flashy like its Michigan coast neighbor but it’s peaceful and pretty.

Beer and Burgers in Green Bay 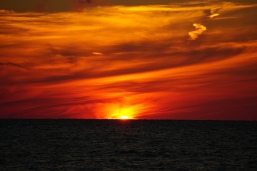 Green algae bloom near the city of Green Bay 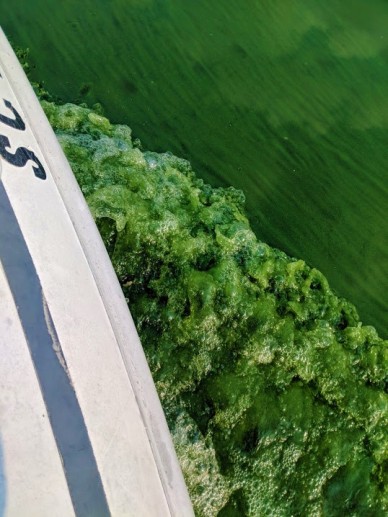 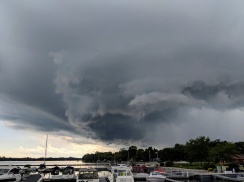 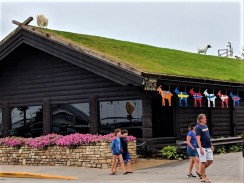 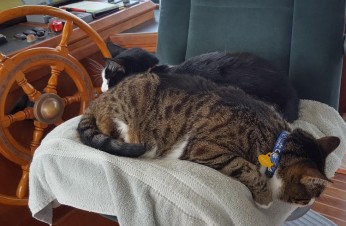 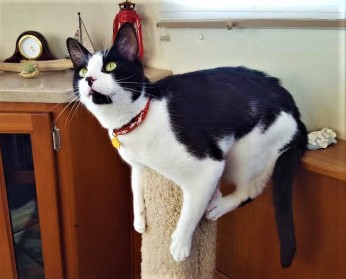 In Green Bay, we dressed up (as best we could) for a National Railroad Museum event on their Silver Spirit Dining car. After cocktails and appetizers, the train chugged us around the grounds for a bit and then we settled in for drinks and a delicious 5 course meal. Craig was excited as a kid…on a train!

We had a great visit from our friends Dick and Peg Bousum and Peg’s sister Barb and her husband John. The windy weather didn’t allow us to take Dick out on Joy Girl but we ate a scrumptious lunch at historic Wilson’s and ordered the most decadent ice cream creation I’ve ever seen in celebration of their 47th wedding anniversary. Congrats Dick and Peg! 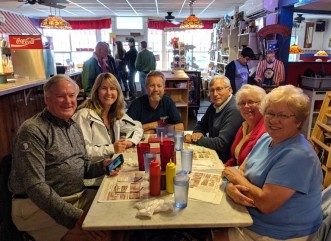 Lunch at Wilson’s in Ephraim

Last, but not least, we went to the Packers vs Bears home opener, the first game of the Packers 100th season. What a heart stopping game that was only clinched by the Packers with 75 yard run for a touchdown at the 2 minute mark! The crowd was so loud my ears ached and Craig almost lost his voice from screaming the Bears down. 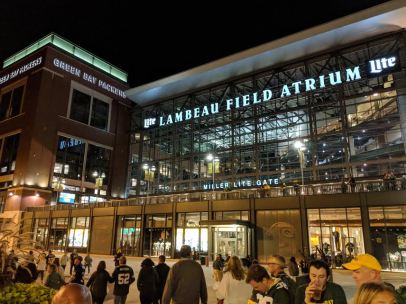 We’ve now traveled 2,700 miles. Wisconsin was a crossroads for us since Craig’s main objective was to bring Joy Girl here. After that, we weren’t sure if we would put her “on the hard” and store her here for the winter, which would allow us to go home and reconnect with friends and family. Or, we could continue with “The Loop” and go down the mid-west rivers to the Gulf of Mexico, around Florida, then back to Hilton Head. We’ve been torn, weighing the pros and cons of each option 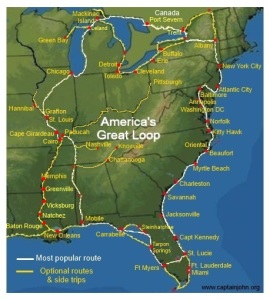 and brainstorming for weeks. At long last, due to multiple circumstances, we’ve decided to finish The Loop!

We haven’t mentioned the Loop a lot because we weren’t sure we would crank all the way round, so here is a map compliments of veteran Looper and resource extraordinaire, Captain John. We will aim for Mobile, Alabama.

We left Green Bay today, heading toward Chicago. After about a week cruising down the eastern coast of Wisconsin, we’ll visit our brothers and Craig’s mom in Chicago, traverse through downtown Chicago in Joy Girl, then head south on the Illinois river. More adventure awaits!

2 thoughts on “The Door”