For the past two weeks we cruised the bay of Green Bay, which extends north from the city of Green Bay, Wisconsin. One of the highlights was the Northern Sky Theater, an enchanting outdoor venue located in Peninsula State Park.

At first, we were flummoxed about how to get there since it’s in the middle of the woods, far away from town, and we don’t have a car. After ruling out bikes (too far, too dark) and Uber (too expensive), Captain Craig wisely concluded,

That hatched one of our most fun adventures yet. The day of the show we anchored Joy Girl near the theater in Horseshoe Bay, fired up our dinghy (appropriately named Ode to Joy), motored in to shore, parked it on the beach, and walked the half mile wooded pathway to the theater. We chose the 6pm show so we could make it there and back before dark. 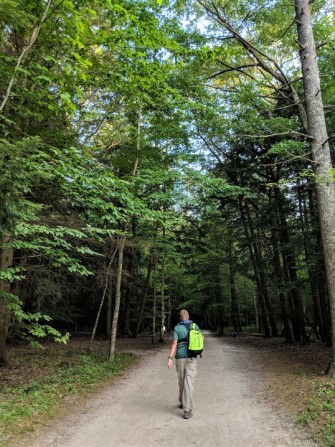 Walking in to the theater

We were not disappointed! “Lumberjacks in Love”, an original musical performed here since 1996, was as hilarious as the title promised, with great acting, nice voices, and goofy jokes. And we enjoyed it all surrounded by towering trees in beautiful weather. Very cool! 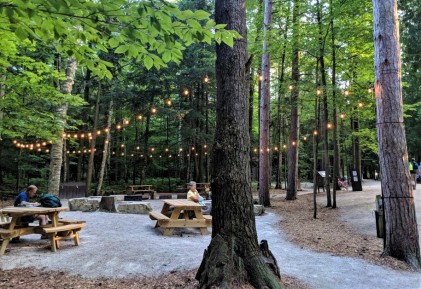 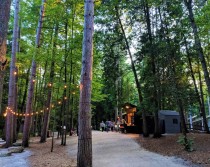 In fact, we loved it so much that we decided to go back for another show just two days later. “Dairy Heirs” had one performance at 8pm so we got our bold on and decided that this time we could dinghy home in the dark. It definitely added a new twist to an old plot for us.

As to the show, “Dairy Heirs” is a “Mooo-sical” centered around a Wisconsin dairy farm, and was even better with beautiful voices, spot on comic timing and even a bit of drama…and a completely original script and music. Wow!

Craig has never met a stranger, and instantly struck up a conversation with Nola and Dave as we waited for the mad rush to get the best seats in the unreserved section. We ended up having a blast with them and hope to see them again in September when we travel through their hometown, Peoria, IL.

After the show, we used our flashlight like a dinghy headlight to find Joy Girl as she floated in the harbor with about five other boats. The half moon was glowing gold, the air was warm and the night was calm. We had a ball.

Next week we’ll travel to Chicago to do some family stuff and then we’ll be back in the waters of Green Bay. Talk to you then!