As Joy Girl, her feline officers, and human crew continue to make their way northward, it would only be appropriate for a man with 35 years of flying to visit Kitty Hawk, NC.  As you may well know, this is the site of the first powered, manned flight in history.  On that glorious December 17 way back in 1903, Orville and Wilbur Wright’s years of research, dreams, and efforts finally came to fruition in a short 12 second, 120 foot long flight along the windswept sands.

In addition to the life size recreation of the famous (and I believe only) photo of the historic event, the National Park Service Wright Memorial includes a placard at the very spot from which their aircraft first became airborne, reconstruction of their 1903 workshop, living quarters, and hangar, as well as a full scale model of the rail from which they launched their flyer. 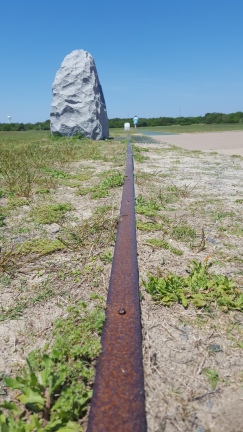 Out in the distance, 4 stones mark the landing points of each of their successively longer four flights that day.  This is picture shows Craig at the touch down spot of the famous first flight, with the landings of flights 2, 3, and 4 behind me:

Several years ago while touring the Boeing factory in Everett, WA, I recall them saying that the fuselage of a 747 is so large in both length and breadth that the Wrights could have completed their entire flight inside of the jumbo jet!  A lesser known fact is that enhanced images of that flight suggest that pilot Orville may well have been wearing a hat from the vessel Joy Girl:

While we were out and about, we took our rental car down to Cape Hatteras to visit the iconic lighthouse.  Built in 1870, 20 years ago the famous brick tower was in danger of being reclaimed by the sea.  The shore, once 1500 feet way, had eroded to within 150 feet of the lighthouse, so they moved it!  After digging down around the foundation, they actually jacked the entire structure up a bit at a time, got it onto a rail system, and moved the nearly 200 foot high lighthouse 2900 feet inland.

Climbing the light involves 258 steps, roughly the equivalent of going up a twelve story building, in a dizzying spiral around the perfectly cylindrical interior of the tower (the cylinder, inside the conical exterior, is some of what gives the lighthouse its strength).  It took some breathing to get our aging bodies up there, but the view from the top, well, it took our breath away and was definitely worth the effort.  No picture can do it justice, of course, but we’ll leave you with this shot looking out over the tip of Cape Hatteras and hope that someday you will be able to take in this view in person: 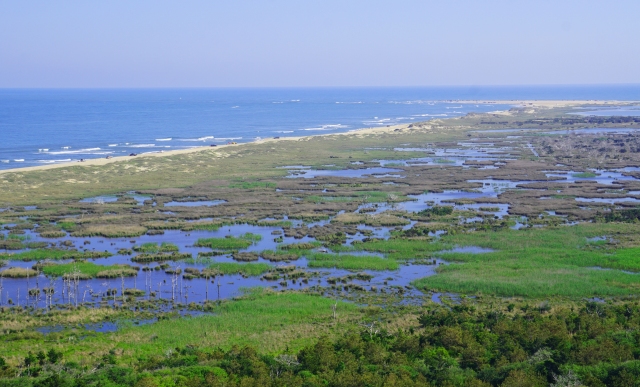